My Closest Neighbor (Estimating with Fractions)

At TMC14, I attended the same morning session for the three days that I was at the conference.  It was a session for middle school teachers and we spent time thinking about games.

I like games in the classroom, so this intrigued me.  We started by playing games and reflecting on their value in that classroom and how we could not only use what we played, but how we could structure time for the games.  I particularly liked the game Swish.  Here is a video if you haven't heard of the game before.  It is easier to watch than for me to explain.

I liked that Swish gave students practice working with transformations without them having to have been formally introduced to them.  It was also easy to create levels of skill by telling students they could only win cards if they could do it in 2,3, 4, 5, etc. moves.  More moves means more cards, but ups the difficulty level.

After playing the games, we spent the next two days developing and playing the games we created.  If you would like to see all of the games that were created click here to go to the middle school page of the TMC14 wiki. 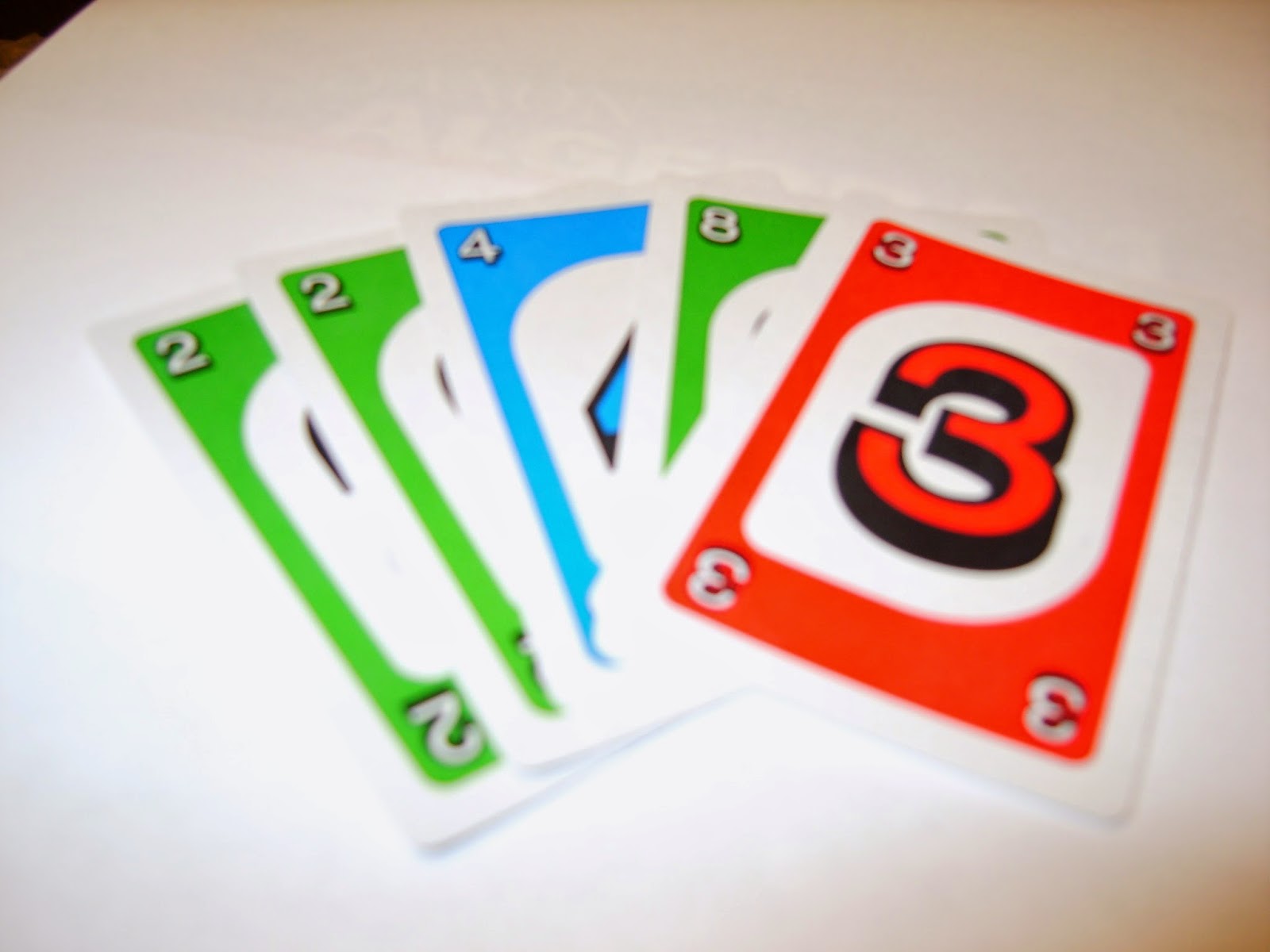 One of the games that I played and really liked the adaptation for was the fraction war game on the wiki.  The variation that I played involved giving each player 5 cards.  We used Phase 10 cards to play with, however, I don't have those.  I do have Uno cards, and that allows me to play with fractions that have denominators from 1 to 9.  Until I can get Phase 10 cards, Uno is a good substitute.

After every player has 5 cards, we set a goal.  We decided that the player closest to 1/2 would win the round.  To not have fights among students, I made cards for them to flip over and make their goal for that round. 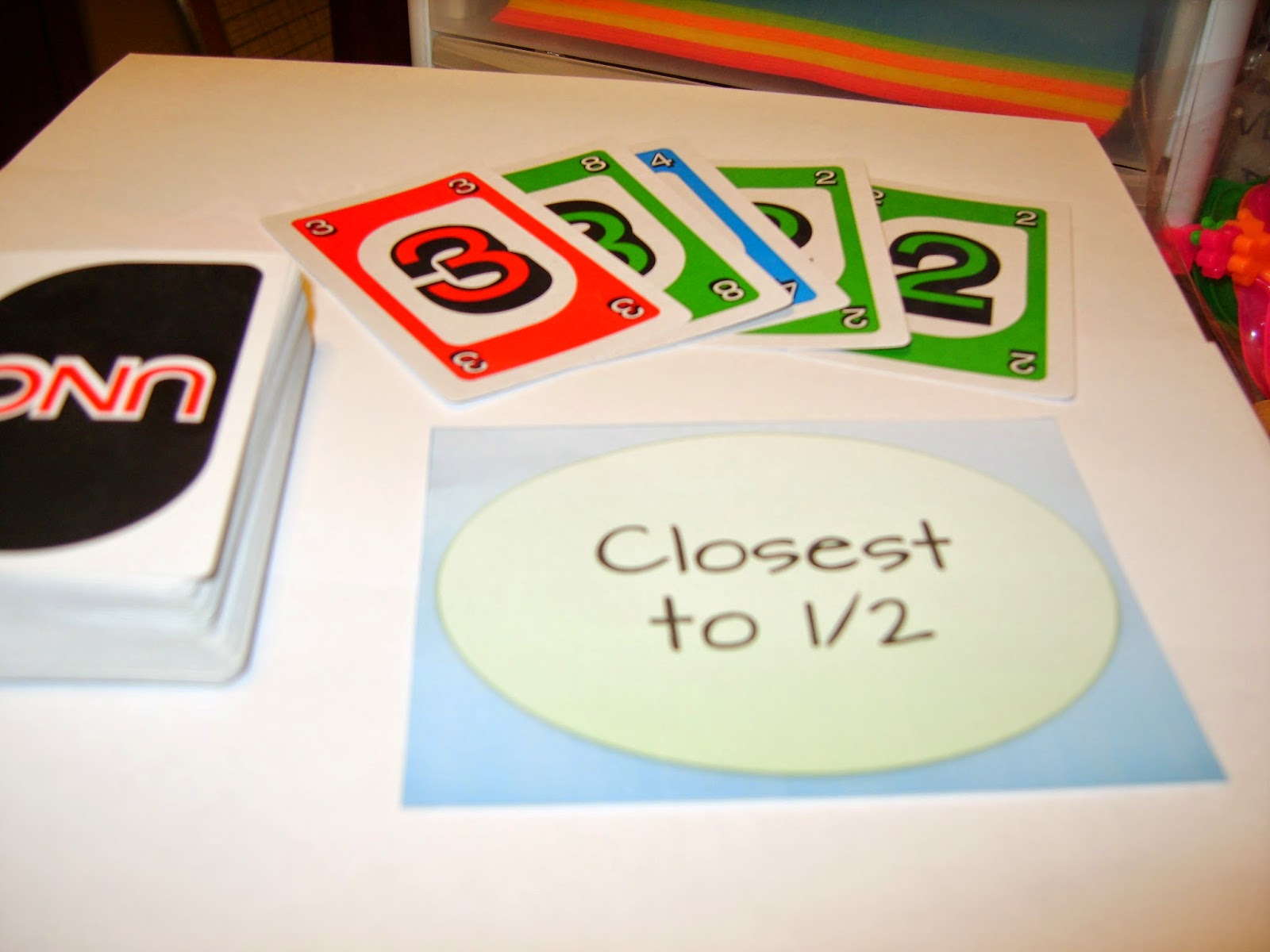 As you can see in the picture, the goal was to get the closest to 1/2.  So based on my hand above, I know 2/3 and 3/4 are too big, but would it be closer than what the other players put down?  That is where I (and students) need to take some strategy.  (It also needs to be decided ahead of time if going over is OK or not.)  My other options are 2/8 or 3/8.  So I have to pick one and hope I am the closest.

Since 3/8 is closer, I would choose to play that and hope that I would win.  Now, imagine the discussion that would happen and the proof that the students would have to have if another student put down 3/7.  Which is closer?  How do we know for sure?  How can we prove it?  These are great questions for mathematical thinking and great opportunity to do informal proof and debate in the math classroom.

Now what is pictured here would not work for closest to 1/2 because 2/4 is exactly 1/2 and that isn't what the card said.  This is a great chance for students to identify equivalent fractions as well. 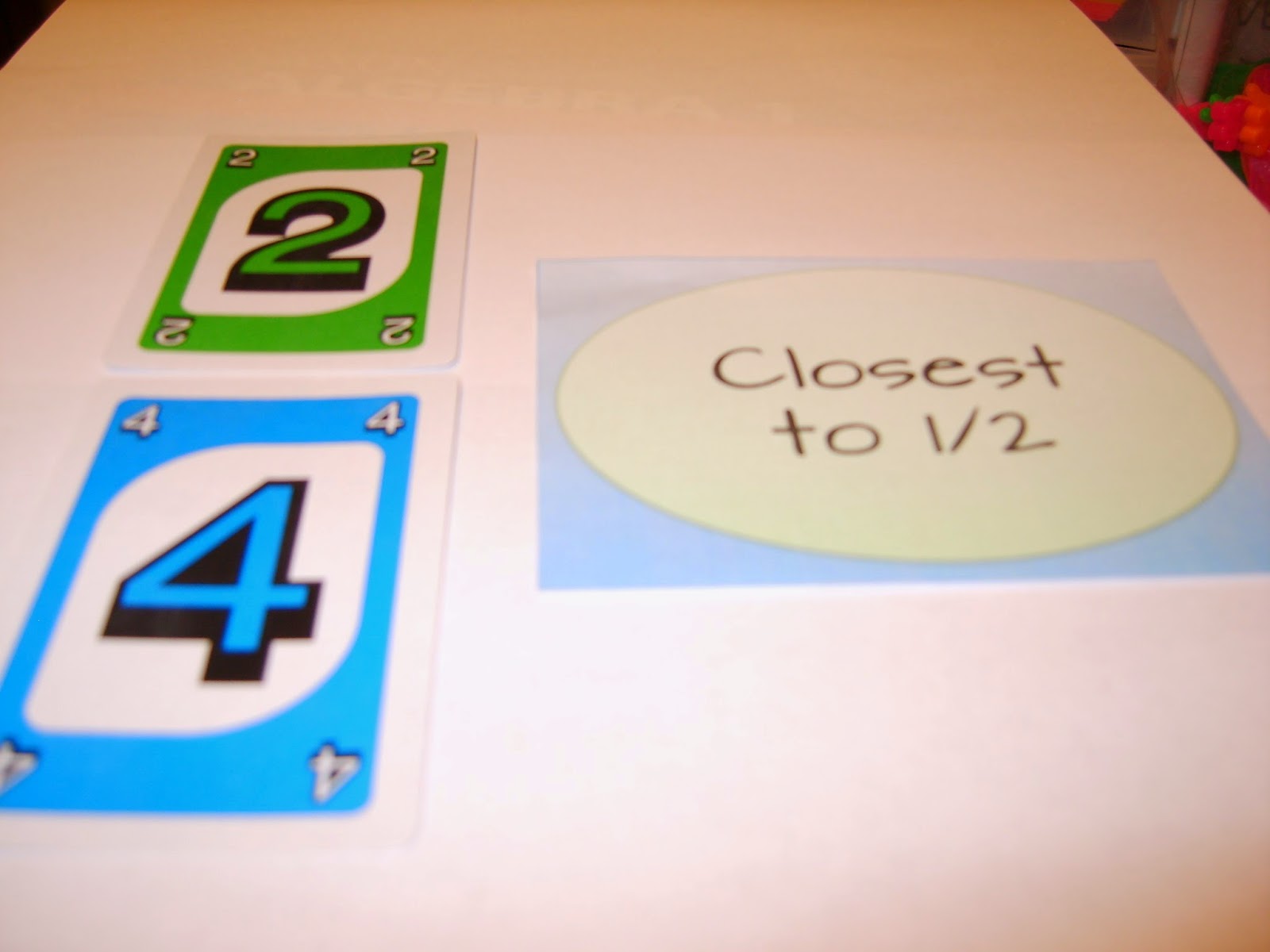 I didn't develop this game.  It came from another group's game fraction war.  As we were rotating and playing each others' games, my group mate Justin thought it would be an interesting twist to try to get the closest fraction to a certain value.  We played a few rounds like that and the discussion about what was close or that exact didn't win was valuable and worth time in my classroom next year.

All that I can take credit for is giving it a new name, "My Closest Neighbor" and making the cards on the Power Point presentation below.  I left this editable.  Depending on how good my kiddos get at this, I may need to add 6/7 or 1.2 to the mix.  I do think some decimals would be good for them to think of equivalencies and conversions.

I am looking forward to trying this with my kiddos in the fall.  My seventh graders should enjoy it!