So, this week I was trying to use foldables for notes instead of just letting my 8th grade Algebra students write their own notes like I have been.  On Friday, we finished our second foldable of the week (crazy week with field trips canceling a few our classes).  After making the foldable, I have been having the students work on a skills sheet that I am calling "math workshop" for lack of a better title right now.  While students were working on the skill sheets and using their foldables (rarely saw them referring to their notes before without encouragement), I started hearing, "Oh! I get it.  It's like the example under the third flap." or "Hey, I actually get it!".  I had more than one student say that this lesson was easy.  I was getting more and more excited with each positive that they gave.

This year has been a struggle for me to teach math in a way that it hasn't been before.  I really felt like I lost my math groove.  What I realized on Friday was that I had been holding myself to a program too strictly.  When I followed the prescribed lesson, but put my twist on it, things started to click and I was so happy and sad that I didn't figure it out earlier.  Now that we are on a roll, I want to keep the momentum going and finish strong at the end of the year.

Here are some photos of the foldables we made this week.  I am sorry about the picture quality on some of them.  It was the best photo I could get. 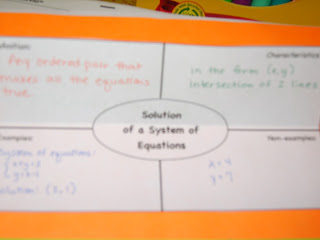 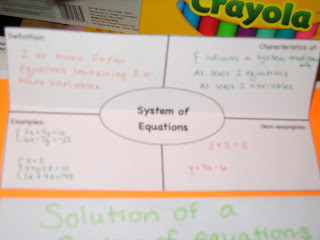 This is the simple foldable that we did for the first day.  The students filled in the example part of the foldable the rest was typed in for them. 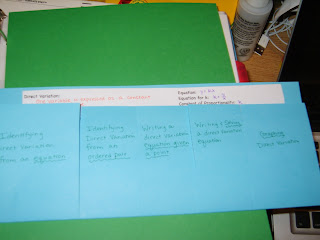 These two pictures are our foldable for direct variation.  There were five examples in the textbook and I made each one a flap of the foldable.  I also had the paper not folded exactly in half so we could write the definition and direct variation equations at the top and it would be visible for the students.