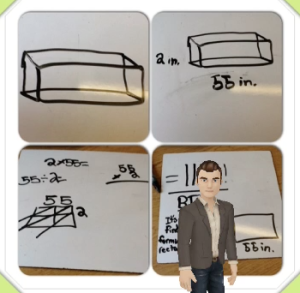 This picture caught my eye on Pinterest a while back and I am finally getting around to checking it out.  This comes from Matt Coaty who writes the blog Educational Aspirations.  Matt teachers gifted and talented students at the elementary level.

When I first saw it, I thought what a cool idea for getting students to show multiple representations of the same vocabulary word.  After closer inspection, I realized that the students were actually showing how to solve the problem.  I thought this is brilliant and totally motivating for middle school kiddos.

Since I had never heard of Tellagami,  I downloaded the free version from the app store on iTunes to my phone.  I played with it a little bit and it is pretty simple and students would figure it out quickly.  It's nice from the standpoint that there are a limited number of choices that the students can pick, so they can't spend hours picking the outfits and hairstyles and then never get to the math.  There is the option to type in the text and let a computer voice say it or you can record your own voice.

I have finally made my first gami about slope.  To start, I made up some cards about slope.  I opened the app and selected the background, then took a picture of my cards with the little person on the screen.  Then I recorded a little something about slope. It was really that simple.


But, there are some downsides to this app that I found as I played:
1) There are in-app purchases (boo!).

2) There is a limited trial time to access everything.  After that you are left with one type of clothing which you can change the color of the shirt/pant.  That doesn't bother me.  Losing the ability to type what the character should say and then pick a voice is a bummer for me.  I don't want to pay for it.

3) There is the cost for the educational version of the app.  The cost is $4.99/subscription.  The up-side is that there are no in-app purchases.  It's just a bit too much to ask my school to pay at this time.

4) Because of the in-app purchases, I can't have students use their phones to produce a Tellagami.

5) Students are limited in the free version to 30 seconds.  I believe it is reasonable for a vocabulary word, but might not work to explain a problem.

6) There just isn't an easy way to collect them and put them into a file for later that I can figure out.  The email depended on the email entered into the device.  We can't use Facebook or Twitter for good reason from our school devices.  The only other option to share is via text.  That is how I was able to link my screen shot to the gami that was made.  So, timing is vital if students create these.  We need to share them during the same class period.  Or, one day is for planning and another day is for recording/sharing.

I know that my students would love it.  But I am not sure after playing with it.  So I started thinking of alternatives.  Since my students enjoy making videos, we could do it without the Tellagami app and just record a video and save it to Google drive.  We would loose the computer animated person though and I know that would be novel and intriging.  They could make their own figure and insert it into the video.  Ultimately, the idea that Matt wrote about on his blog can be adapted.

I am putting this out there, hoping, that maybe there is someone wiser than I, who can tell me other options to work around the downsides of the app.  Does anyone use Tellagami (or something similar) in their classroom?  What do you do with it?  Love to hear about it!
Posted by Chris at 11:49 PM