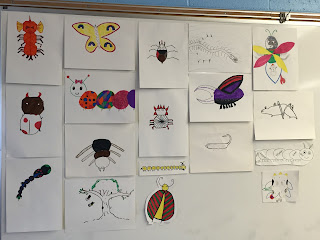 I gave each of my students a clean sheet of white construction paper and asked them to draw a bug.  They could make a bug that lived on the earth or one that hadn't been found yet.  Most of them decided that the undiscovered bug was more fun to draw.  After 20 minutes of time, I put the pictures up and started asking some questions about the bugs on the board.

I kept asking questions and listening to their responses.  My purpose was to try and figure out how comfortable the class was with benchmark fractions and estimating with fractions.  There were some huge differences between my sixth grade groups.  Some groups argued with each other about how many bugs made up 3/4 and other groups there were crickets.  It was a good eye opener for me about how well they get benchmark fractions and how well they will be able to estimate with fractions.